Villa Iris is constructed in one level in 65 sq.m. It includes a lounge with a sitting room and a kitchen. In the sitting room the sofa can be converted into a double bed. A six person dining table separates the kitchen which is fully equipped. Also, a WC is attached to it. In villa Iris there is also a fireplace for your winter holidays. There’s a double bed (coco-mat) bedroom and a two single beds (coco-mat) bedroom. Bathrooms are attached to both bedrooms. Villa Iris can host up to six people. Outdoors there’s a 30 sq.m. pool with sunbeds, umbrella and six person dining table.

On arrival a hamper with breakfast goods, an island map and a tourist brochure with proposed routes, food, entertainment information etc welcome guests. 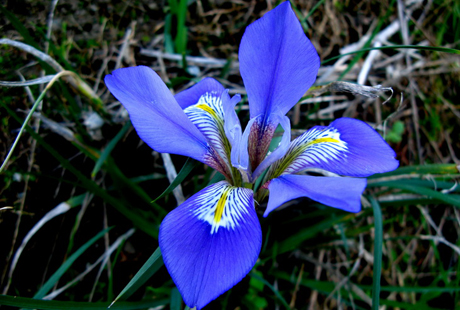 (the name of the villa)
An impressive flower found in the different species in Greece. In Lefkas it has an intense blue colour in yellow and white shades. It’s famous for its pharmaceutical properties.

It’s named after the Greek goddess Iris, the messenger of the gods, carrying the water from Styga in a golden pot every time gods wanted to swear. During that transfer the route was engraved with seven colours known to us as the rainbow colours, hence “Iris colours”

We use cookies to ensure that we give you the best experience on our website. If you continue to use this site we will assume that you are happy with it.AcceptRead More